Obstructive Sleep Apnea is the spontaneous interruption of breathing during sleep. It is a common disorder caused by irregular relaxation of the throat muscles, which blocks the airway when the patient is asleep. Such patients experience shallow breath and several brief stoppage of breathing while asleep. The most common characteristic of obstructive sleep apnea is snoring. 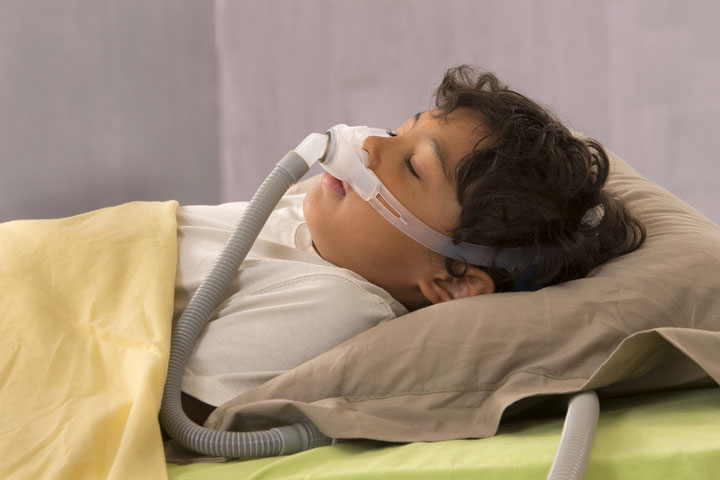 Obstructive sleep apnea causes progressive asphyxia which increases breathing effort wakening up the patient from sleep. Since the upper airway is congested, the diaphragm and chest muscles must make extra effort to relive the blockage and fill the lungs with air. Sleep apnea also leads to irregular heart rhythms and other health risks including diabetes, hypertension, and stroke.

This is the most common type of sleep apnea where the airway is blocked or becomes slender.

Although the airway is not blocked, the brain fails to direct respiratory muscles to breathe.

Obstructive sleep apnea patients can be given some help by providing proper treatment at the appropriate time. Such treatments clear the obstructed airways open during the patient’s sleep making it easier to breathe normally and continuously.

Lifestyle changes such as losing some weight, giving up smoking, and avoiding alcohol can be proved helpful in relieving the symptoms of obstructive sleep apnea.

Continuous Positive Airway Pressure (CPAP) devices are the most used option for the treatment of obstructive sleep apnea patients. However, many patients don’t find CPAP comfortable. There are several alternative sleep apnea treatment options available to those who want to avoid wearing a CPAP mask.

Recently developed, the oral sleep apnea treatment devices prevent the airway from collapsing by holding the tongue in position or by sliding the patient’s jaw forward so patients can breathe uninterruptedly while they’re sleeping.

Oral appliance therapy is best for patients who can’t tolerate CPAP therapy and with mild to moderate sleep apnea.

The most common treatment options reduce or eliminate the extra tissue in the patient’s throat that collapses and blocks the airway during sleep.

The surgeries for the treatment sometimes are minimally invasive, while on other times, they can be more complex and risky. Generally, such surgeries are performed in one of the following organs:

The fact is bitter, anyways. Such surgical therapies don’t necessarily effect sleep apnea disorder as CPAP and oral appliances do.

3.    Taking up a Weight Management Program

Working out and losing some weight is another option that can help improve or eliminate the patient's sleep apnea symptoms, if they’re obese or overweight.  However, this is not a surefire way to get rid of the disorder. Though it might be of help for certain patients, yet there is no guarantee that losing weight will eradicate their sleep apnea.

Positional therapy is a behavioral strategy to treat positional sleep apnea. Some people have sleep apnea primarily when sleeping on their back. This is called the “supine” position. Their breathing returns to normal when they sleep on their side. Positional therapy involves wearing a special device around the waist or back of the patient. It helps the patient to sleep in the side position without leaving a scope for changing position.

The long term efficacy of this therapy has been tested by the scientists and they found that positional therapy can be an effective treatment for obstructive sleep disorder patients.

A variety of lifestyle changes are recommended to the patients of sleep apnea. Behavioral changes such as stopping alcohol intake and cutting off the habit of smoking may help reduce snoring and thus diminishing their sleep apnea symptoms.