In past days, drones were primarily used in military and defense operations including surveillance, monitoring, and many other important tasks. Later with time, these drones are widely used in various sectors starting from smart farming to diffusing roadside bombs. Nowadays, the usage of drones or unmanned aerial vehicles (UAVs) is broadly increasing commercial industry apart from the defense sector. Having a wide range of benefits, present drones are equipped with modern technology which further enables data integration for many operators. 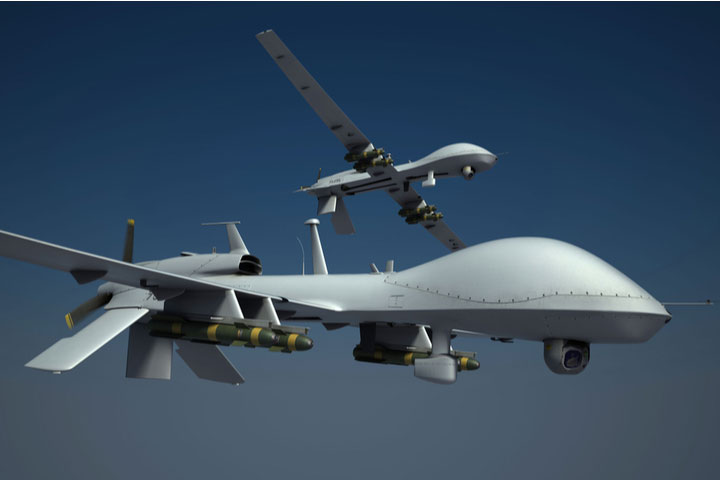 Unlike earlier days, combat drones or unmanned aerial vehicles (UAVs) have changed and modified their functionalities, to perform various operations in the commercial industry. Previously, these drones were basically used in military and defense fields. However, now by adopting modern technologies including advanced hardware such as sensors and cameras and upgraded software, these drones are capable of helping the defense and military sector on a broader scale. Currently, defense drones can be used for purposes, starting from carrying heavy ammunition weighing thousands of kilograms to saving lives and aiding several difficult missions. Not only in the defense sector, but these drones are widely used in smart farming, smart electric grids, transport, construction, and many other sectors. Before moving towards the numerous benefits of drones in defense sectors, let’s begin with the fundamentals first.

What is a Defense Drone?

Defense drones or unmanned aerial vehicles (UAVs) are aircraft that can be controlled and guided autonomously, without the onboard presence of pilots. These drones are designed with sensors, target designators, electronic transmitters to perform target-oriented tasks. Normally, a drone can perform a range of tasks from military operations to package delivery. If we talk about their sizes, these drones can be as large as an aircraft and also can be as small as the size of your palm.

Particularly, defense drones are designed to identify terrorism-related activities and risks, provide security by identifying the risk of vulnerable areas, and save innocent lives from any kind of terrorist attacks or threats by doing proper surveillance. Nowadays, these drones are counted as modern-day force multipliers that can double the strength of the security forces and counter against the emerging challenges in defense and the security of the homeland.

What are the Key Advantages of Defense Drones?

Drones have a plethora of advantages in defense and military sectors by having expanded utility in military applications. Some of them are listed below:

Due to the rise of the Covid-19 pandemic, the turning attention of governments of many countries from terrorism and surveillance operations to address the public health crisis has badly impacted the global defense drone market. However, currently, the increasing investments by the government of many countries in the defense sector all across the globe is the major factor expected to augment the growth of the global defense market in the near future. The market is envisioned to generate a revenue of $16,902.0 million and grow at a noteworthy CAGR of 7.9% during the estimated period from 2021-2028.

The growing technological advancements and increasing usage of artificial intelligence and machine learning will create massive growth opportunities for the defense drone market globally. Moreover, to control the threat of rising terrorism activities worldwide, the demand for defense drones will be going to increase in near future.

Preview an Exclusive Sample of the Report of Defense Drone Market