There has been a subsequent increase in the number of the gamers across the globe, owing to the availability of high-speed internet and significant increase in the standard of living among people across the globe. Moreover, growing prevalence of e-sports and online multiplayer games has enabled various companies to shift their advertising budgets on digital platforms and games to maximize their reach. 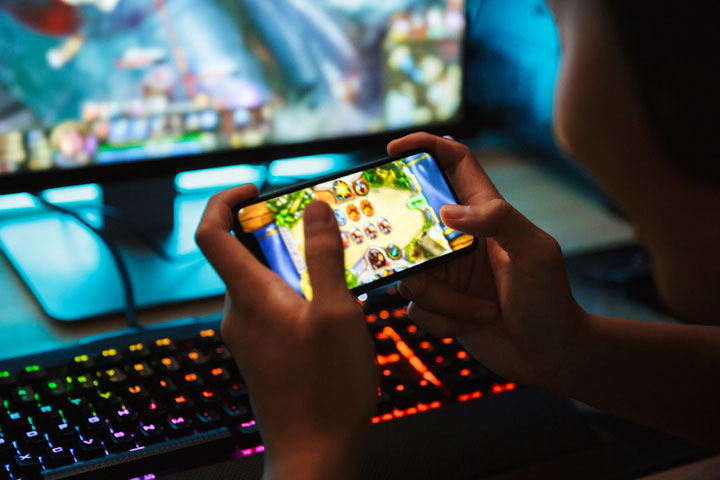 Quarantine would have been absolutely unstimulating for some people, if it wasn’t for online games. People across the globe increasingly engaged themselves in online games be it on mobile phones or desktops as it not only helped people to be in touch in the unprecedented times but also appreciable acted as a leisure tool to kill time. Gaming companies also persistently focused on their improvements and updates in order to make the best out the situation during the pandemic, enhancing the overall gaming experience for the professional as well as the casual gamers.

Certain large storage games made it extremely convenient for gamers to choose the level of graphics in the game according to the device they are playing it from. Some smartphone devices are not compatible to use the games on the high or ultra-graphics mode. In that case, they can choose the level of graphics according to their devices so that their performance in the game is impeded. Some games made it possible for gamers to not only integrate with others gamers through multiplayers mode but also provided an in-game audio feature, in order to effectively enhance the overall experience of the game. This particular feature created a great deal of anticipation and engrossment among numerous gamers across the globe. Thus, the ever-growing population of gamers made it ideal for various companies to diverge their advertising budget towards games so as to enhance their reach and create remarkable awareness about the respective company’s products and offerings that is incorporating the in-game advertising.

According to the report published by Research Dive, the global in-game advertising market is expected to generate a revenue of $13,989.6 million by 2028, growing expeditiously at a healthy CAGR of 11.2% during the forecast period 2021-2028.

Mobile games have witnessed a tremendous growth over the past two years, seeing an astonishing 45% increase in game installations from 2019 to 2020, flourishing into a $120 billion+ industry. Thus, it is evident that in-game advertising is one of the most effectual revenue channels for promoting mobile apps. Thus, integrating advertising into innovative, highly anticipated games can get a worthwhile response from gamers and can also generate ample revenue. In addition, this type of advertising technique can create great deal of awareness and visibility among the people. The competition on this advertising channel is also considerably lower than other channels. This platform also provides a colossally extensive reach for the promoters, and is capable of getting an emphatic response from the masses. Furthermore, it is a persistently growing field as not even males but even females across the globe are getting immersed in playing games, in fact, today the mobile gaming gender split is 51% female and 49% male. Therefore, advertisers can consider the popular gaming apps to be a worthy and irresistible marketing channel.

The Way Ahead for In-Game Advertising in the Coming Years

The emerging trend of online interactive gaming and growing prevalence of e-sports across the globe is appreciably expected to increase the demand for in-game advertising in the near future. There has been an enormous growth in the gaming industry, particularly due to the occurrence of lockdowns in various countries across the globe during the pandemic. The internet penetration and installation of gaming apps surged exponentially during the pandemic as stringent restrictions on social distancing were imposed by the government in order to curb the spread of the virus. So, online games made it possible for people to indulge in interactive online games. Thus, the impact of COVID-19 has significantly had a positive impact on the growth of the global in-game advertising market. Furthermore, availability of high-speed, cost-effective internet services coupled with expansive use of smartphones for gaming is anticipated to create substantial opportunities for the growth of the global in-game advertising market in the coming years.