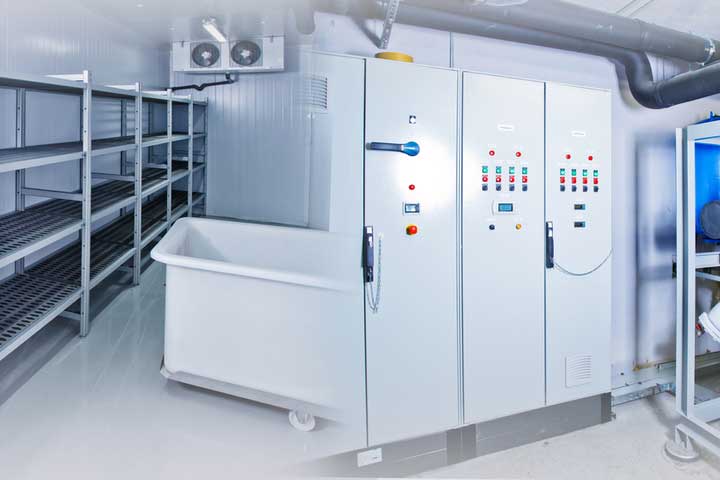 Traditionally, in the early 18th century, food was stored and preserved by consumers by purchasing ice from the icebox harvesters. Thomas Moore was the first man to patent a metal-lined butter-storage tub, which later became the model for most iceboxes. However, in the period of mid-19th century, the Boston-based General Electric (GE) was one of the first companies to overcome these challenges by launching Monitor Top refrigerator. This was the first ever storage refrigerator to run on electricity. However, the technology for storing and keeping things cool has changed greatly over the past hundreds years.

The storage refrigeration monitoring is a procedure of removal of heat from substance, system or space to maintain and control of temperature lower than surrounding temperature by using coolants. These storage refrigeration systems play a vital role in various applications such as lifestyle, industry, agriculture and others. These systems are used for both storage and transportation purposes and lower the bacteria production. These systems provide several benefits and hence they are used in diverse industries that include healthcare, food and beverage, and others.

Impact on Lifestyle and Diet

Traditionally, foods excluding staple foods were heavily affected due to the temperature and no provision of proper refrigeration. But today the storage refrigeration monitoring systems have removed these limitations. These systems are gaining popularity owing to its several benefits such as storing essential items and reduction in spoilage. Over the years, refrigeration has played a major part in the feasibility of the modern supermarket. Out of the season fruits & vegetables are now available at relatively lower prices. Refrigerators have also led to a huge increase in dairy products and meat as a portion of total supermarket sales. Moreover, the ability of these systems to store food for longer period has led to a surge in leisure time.

As per Research Dive analyst review, the introduction of storage refrigeration monitoring has allowed for the storage and hygienic handling of perishables. Refrigeration has also promoted availability, consumption, and output growth of nutrition. Today, people are not only consuming these perishables because it became easier for them to store, but because the technological innovations in storage and transportation has led to less waste and spoilage, thereby driving down the prices of these products.

The most broadly used current applications of storage refrigeration monitoring are for refrigeration food at home, air conditioning of public as well as private buildings, and refrigerating food in restaurants and big storage warehouses. The use of walk in cooler, refrigerators, and freezers in warehouses, factories, and kitchens for processing and storing fruits & vegetables has allowed us to add fresh salads in our modern diet. The refrigeration systems have also allowed for meat and fish storage for extended time periods. An ideal temperature range for storage of perishable food is 37 to 41 °F (3 to 5 °C).

Refrigeration systems are widely used in manufacturing & commerce industry. One of the vital use of these systems is to liquefy gases. It is also used to condense water vapor to reduce the moisture content in air purification. In petrochemical plants, chemical plants, and oil refineries, storage refrigeration monitoring is used to maintain low temperatures in certain processes. For instance, by producing a high-octane gasoline component from butane and in alkylation of butene. Refrigeration is also used by metal workers to temper cutlery and steel. Moreover, refrigeration is a necessity for transporting temperature-sensitive foodstuffs and other materials. Dairy products needs continuous refrigeration to prevent from getting spoiled.  According to study it is revealed that eggs also need refrigeration during transportation. Thus, storage refrigeration lowers the bacteria production and keeps the food edible for longer period.