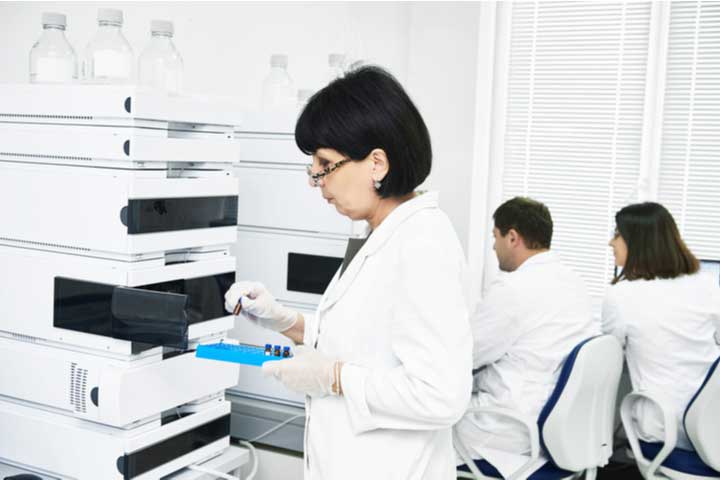 One of the most widely used methods for the separation of mixtures is Chromatography. Usually, in chemical laboratories, this technique is used in the process of analysis, isolation and purification of compounds. Some materials seem to be homogenous, but in reality, they are a mixture of two or more substances. For instance, green plants comprise of a mixture of various pigments. Moreover, the black ink used for writing is a mixture of several colored materials. In such mixtures, using the technique of chromatography, we can segregate the materials by dissolving them in a suitable liquid and letting them pass through an absorbent matrix, for example, a paper. Generally, the technique of chromatography is used by scientists to segregate organic and inorganic compounds for their analysis and research.

1. Chromatography helps in enhancing the flavour of apples

It is very essential for apple producers that they understand and are able to measure flavour attributes of an apple. Only, then they will be able to grow new varieties and flavours of apple. To solve this problem, a group of Italian scientists came up with a way for studying the flavour of an apple.

They dipped a single variety of apples into flavoring solutions representing floral and anise. The efficiency of the flavoring solution was determined using solid-phase microextraction gas chromatography-mass spectrometry SPME/GC-MS). Scientists stated that using this technique apple producers can modify the flavour of a real structure by simply submerging the whole fruit in flavor solutions that are appropriate for flavoring the fruits without changing their nature.

Scientists have already discovered methods such as bioremediation and air sparging for remediation of soils. However, these methods are quiet time consuming and can be only applied to certain types of soil and specific climatic conditions. Hence, Lithuanian scientists have explored new techniques such as thermal air and water vapor plasma for remediation of soils. Thermal plasmas offer radicals (OH, H and O ions) that are able to react rapidly and degrade the left-over pesticides present in soil. Researchers examined the concentrations of organochlorides in soil before and after treatment using a different technique such as gas chromatography-mass spectrometry. After this analysis, scientists discovered that organochloride residues were greatly reduced after plasma treatment of the soils, signifying that thermal air or water vapor plasmas can be used to clean up contaminated soils.

3. Use of Chromatography in the treatment for Malaria

Various remedies to cure malaria have already been discovered. And one among them is a treatment that is based on artemisinin, which is a compound isolated from the plant Artemisia annua.  However, Plasmodium falciparum - the most dominant malaria parasite in South East Asia and sub-Saharan Africa - has now established resistance to artemisinin and its derivatives known as ACTs (artemisinin-combination therapies). Hence, the invention of an innovative remedy is urgently needed and scientists in Guinea, West Africa have studied the characteristics of Terminalia albida, a plant found in this region. Scientists have discovered 12 bioactive compounds with the help of liquid chromatography-mass spectrometry (UHPLC-HRMS).

The group of scientists in Guinea carried out in vivo and in vitro studies on malaria infected patients. In vivo, they came to know that the plant excerpts significantly improved the survival rates of infected mice and also decreased the number of parasites in infected blood. However, before treatments with the plant can be suggested, additional researches are still needed for the effects of the plant and the antiparasitic techniques used and long-term toxicity.