Increasing demand for chromatography technique in hospital & research, and pharmaceutical & biotechnology industries to fuel the growth of global chromatography system market. Asia-Pacific region to dominate the market. The availability of alternative techniques to restrict the market growth. 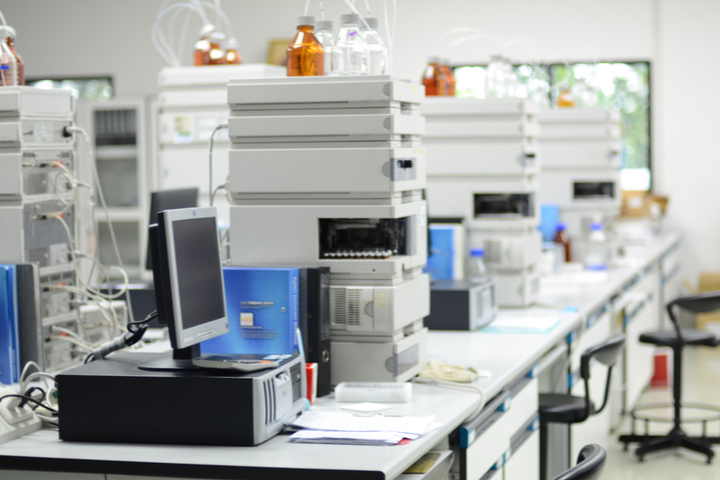 What is Chromatography Technique?

It is the physical method of extrication of specific components from a sample mixture to identify and test various biological compounds. With this technique, the biological components can be separated from different types of organic samples such as, water and air. For several decades, chromatography and its resins and reagents have benefitted the researchers. Primarily, this is due to the techniques ability to separate, purify, and test biomolecules in the utmost effective manner.

The four main types of chromatography techniques are:

On the basis of absorptivity of the compounds, different compounds are adsorbed on the adsorbent to diverse degrees. In this process, the mobile phase is made to transfer to the stationary phase. Thus, the components with higher absorptivity are carried to a lower distance than that with lower absorptivity.

In this process, a glass plate is used that is coated with a very thin layer of adsorbent, for instance alumina or silica gel. With the help of this glass plate, the mixture of substances is separated into its components. The plate used here in this process is known as chrome plate.

At a distance of 2 cm directly above one end of the plate, a small spot is applied for the solution of the mixture to be separated. A plate is later placed in a closed jar that contains a fluid known as eluant. Doing this, the plate then rises up carrying several components of the mixture to different heights.

This technique is used to separate the components of a mixture by using a column of suitable adsorbent filled in a glass tube. An appropriate eluant is slowly made to flow by placing the mixture on the top of the column.

Chromatography Systems: The Most Flexible Systems

Chromatography systems can manage both complex and simple purification tasks and deliver accurate results for all operation scales. They are extremely flexible systems and can be simply configured in automated multistep purification labs. The chromatography system is typically used to separate sample mixture, components, and ions into two phase systems- stationary phase and mobile phase. These systems play a vital role in the field of research laboratories, biotechnology, agriculture, and pharmaceutical through easy and inexpensive separation methods.

In the last few years, prominent market players have introduced new and improved chromatographic systems into the market that have the capability to lessen the processing time and deliver accurate analytical results. Agilent Technologies Inc. and Shimadzu Corporation are investing more on R&D activities for developing new products and technologies.  In September 2019, Shimadzu Corporation launched a new product named “Nexera UC Prep”, which is a Supercritical Fluid Chromatography System used for purification process in the pharmaceutical industry. The key players are continually increasing their efforts to implement several strategies such as mergers, acquisitions, and joint ventures, to rise the company position in the global market.

There are several other companies in the market that are contributing in the growth of the global chromatography system market. Some of these include, JASCO Inc., PerkinElmer Inc., Pall Corporation, Novasep Holding, GE Healthcare, Thermo Fisher Scientific, Waters Corporation, GL Sciences Inc., Bio-Rad Laboratories Inc. and Quadrex Corporation among many others. Product development, and joint ventures are the key strategies opted by the operating companies in this market.

The past decade has witnessed a high demand for advanced and innovative chromatographic technologies, which has substantially intensified owing to the higher adoption of flash chromatography and ion exchange in various applications. Ion exchange technology is the advanced chromatography that helps in improving the usage of low solvent to produce high resolution output.

At present, the chromatography system market is progressing rapidly and is positively about to rise in the future. According to a research report by Research Dive, the global market is estimated to garner a revenue of $16,014.9 million, and grow at a CAGR of 6.6% from 2018 to 2026. This is primarily due to the increasing usage of chromatography technique in biotechnology & pharmaceutical, and hospital and research industry. The prominent players of the market are adopting numerous latest trends in chromatography system market along with many approaches such as mergers, acquisitions, and joint ventures to stand out against the competition.