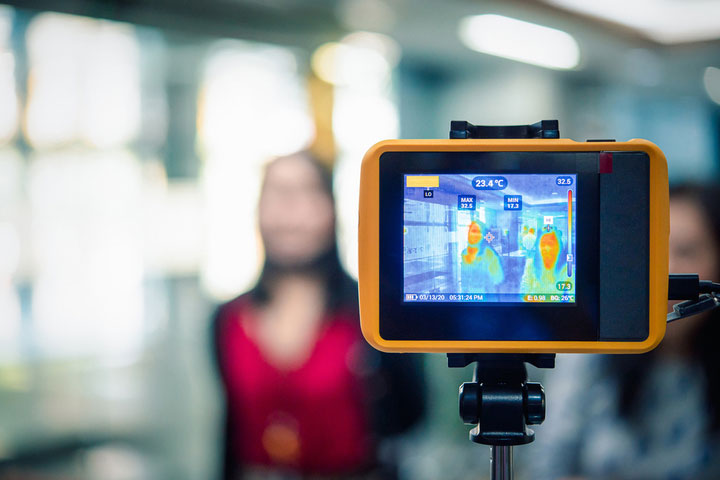 The visible spectrum of the human eye is around 300nm-1100nm, i.e., from ultraviolet to near infrared spectrum. Hence, infrared spectrum that operates beyond 1100nm up to 1400 nm is outside the range of human visibility. Just as the human eye, normal cameras, too, operate in the same wavelength range of 300nm-110nm. However, newer technologies cannot function to their fullest extent in this range. Hence, since the last few decades, thermal cameras have come to the fore which capture infrared radiation (1000nm -1400nm) and convert it into visual images.

Electrical testing, especially checking where a fault in the electrical system lies, can be a cumbersome job. For this, usually, traditional thermometers are used which help in identifying the source and cause of the problem. However, the process of identifying the location of the electrical fault using such thermometers is too long and time consuming. On the other hand, thermal cameras can help in locating these problems quickly. This is because, damaged electric components or faulty electrical lines generally emit excessive heat which is captured by the thermal infrared cameras and, thus, provides the location of such damaged components in visual format within seconds. Furthermore, latest thermal cameras come with easy-to-use interface and quick problem diagnostics which help in taking accurate temperature measurements, storing of visual images and video recordings, etc.

Manufacturing industries run on big mechanical machinery and heavy equipment. These machines generally convert one form of energy into another form so as to perform certain programmed functions and deliver intended output. Usually, big machines run either on electrical power or thermal energy, which is then converted into heat, electrical, or mechanical energy as per the mandate of the machine. But since no machine is perfectly built, some energy is lost in the form of heat while conversion and functioning. This heat, known as emissivity, is in the form of infrared radiation, and hence, not visible to human eye. Thermal cameras keep an ‘eye’ on the emissivity of machine and looks for excessive heat ‘leaks’ as excessive heat dissipation generally means that the machine isn’t working properly. Hence, thermal cameras are nowadays employed by almost all manufacturing companies to evaluate the working of the big and heavy machinery used by them.

Health problems or injuries to animals can easily be detected with the help of thermal imaging. Of all animals, thermal cameras and thermal imaging is most commonly used in the case of horses. Thermal imaging is used extensively in order to detect whether the blood flow in the concerned horse’s body is normal and to check for injuries and inflammation or swelling of muscles. This is done by looking for hot or cold spots on the animal’s body as these spots are a sort of precursor to an impending injury. Certain advanced thermal cameras can also help in detecting whether the animal has sustained any nerve damage in its body.

Using thermal cameras to locate a criminal, who is hiding from the law enforcement officers in order to evade arrest and prosecution, is a rather innovative idea. Law enforcement agencies also use thermal imaging to detect whether a certain car, which they have been looking for, was recently used or not on the basis of heat pattern generated by that car. Thermal cameras, due to their wide range of heat seeking capabilities, can also be deployed from air with the help of airplanes or helicopters in order to track down a criminal.

Apart from the applications mentioned above, thermal imaging is also used in case of wildlife tracking wherein thermal cameras are deployed in national parks and forests to track the movement of wildlife animals, say tigers, and count their number in order to conduct a census operation. Thermal cameras are extensively used in firefighting operations since the smoke in such situations blocks all visibility and only infrared thermal imaging can actually help in locating distressed individuals who are trapped inside the fire. Thus, thermal cameras have widened the scope of human activity and also helped in engaging in such projects or campaigns that were previously thought to be impossible to undertake.