The invention of smart technologies and smart devices is gaining more and more popularity especially among youth across the globe. Among these, smart mirror is a device that is grabbing the attention of many people who might be interested in buying one for their own home in the future. 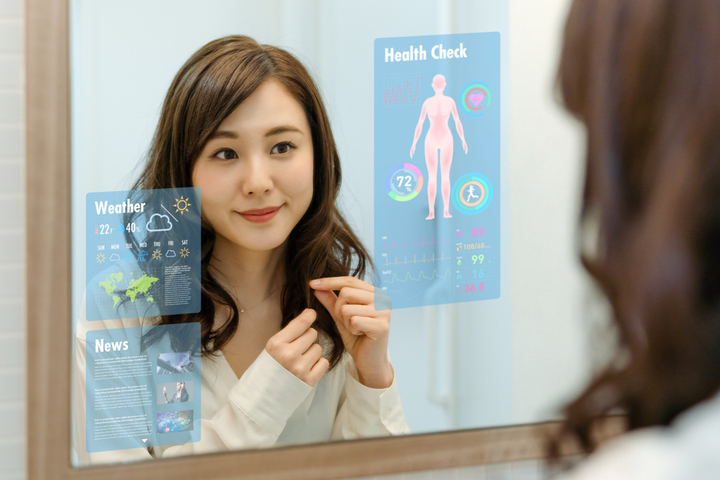 The rising technological advancement in machine learning, Augmented reality (AR), and LED lighting systems has undoubtedly led to the digitalization of our physical world. Nowadays, every device seems to have a ‘smart’ version of it. The advent of smart technology has blessed us with smart watches, smart TVs, smart fridges, smart speakers, and even smart lights. In reality, it was the invention of system on chip (SOC) which gave rise to the concept of developing smart devices. And today, not just the devices technology has shown its miracles in the ‘world of mirrors’ as well. Within this decade, the mirror industry will begin taking shape and smart mirrors will start gaining popularity all over the world.

What exactly is a smart mirror?

A smart mirror is a technologically advanced mirror that consists of a display screen integrated behind its glass. This mirror is capable of displaying anything that a user wishes to see on the surface of the mirror such as news feeds, weather predictions, upcoming appointments, current time, and many more interesting insights. In short, it behaves similar to a mobile handset and enables the user to check all the necessary information on the mirror itself.

Smart mirrors are built using a lot of hardware-technology such as temperature sensors, LED for illumination, LCD Display for information, internet connection, touch capabilities, and operating system. One of the biggest advantages of a smart mirror is the ability to display useful information without the need to open apps or do anything. Instead of using a smartphone, one can gain daily insights, browse social media, read news or even surf the internet while looking at the mirror and finish all the daily grooming tasks.

Today’s population is highly attracted toward smart devices. The invention of smart technologies and smart devices is gaining more and more popularity especially among youngsters all across the world. The ability of smart mirrors to present the valuable insights and data without the need to unlock your smart phone has grabbed the attention of a huge crowd of population from several parts of the world. This is a device whose applications and uses are not just limited to homes but also in various other sectors such as clothing stores, barber shop, beauty salons, shopping malls, hospitals, and even in automobiles. The growing demand for smart mirrors from several areas is creating more opportunity and a wider scope for the smart mirror industry. Especially, the use of smart mirrors in automotive sector is considered to be the one of the major smart mirror market drivers. This is mainly because this device offers the driver of the vehicle an experience of riding with wide camera angle through the LCD screen connected on it which gives the 360-degree view of his car and also increases the safety of the driver with Advanced Driver Assistance System (ADAS).

Currently, smart mirrors seem to have grabbed a huge share of the luxury markets because of the high cost of the device. For now, most of the smart mirrors are developed by do-it-yourself electronic hobbyists and a few companies such as Dension Inc., Ficosa (Panasonic), Murakami corporation., Electric motors, Japan display Inc., Gentex corporation, Magna international Inc., Perseus motors, Samsung Electronics, and Seura among many others. According to a survey, it can be evaluated that this device is grabbing the attention of many people who might be interested in buying one for their own home in the future. According to analysts, every home is going to have a smart mirror sooner or later, because the cost of a normal mirror will soon be very close to a smart mirror in the next few years. And hence, everyone will prefer having a high-tech mirror instead of having a normal mirror for the same price.

Top 5 Most Amazing Trends Reshaping the World of Smart Learning

Fraud detection & Prevention – What it is? Why does it matter?

Perks of Implementing an Enterprise Data Management System for Your Organization

Data Science Platform: A Centralized Flexible Platform and a Software Hub for Business

Content Marketing: The Real Game Changer in Every Marketing Campaign